The 2006 Auto Racing All-America Team
And AARWBA's Driver of the Year, Tony Schumacher, Winner of the Jerry Titus Memorial Trophy™ 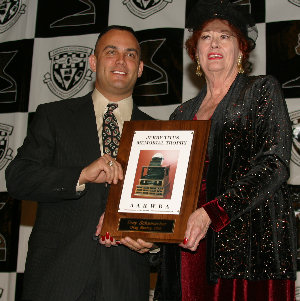 The following news releases were issued prior to the event and are posted here for the historical record.

The 37th Anniversary Auto Racing All-America Banquet, completing AARWBA's 52nd year, was held on January 13, 2007 at the Hyatt Regency Indianapolis at State Capitol, in the World Capital of Motor Sport. Members of the racing news media met to honor the drivers cited for their efforts during the 2006 racing season. It's one of the few banquets in the racing industry that's open to the public.

This page last modified  January 20, 2007
Return to AARWBA home page
Created by Racing Information Systems
Copyright 2006 by American Auto Racing Writers & Broadcasters Association. All rights reserved. The Jerry Titus Memorial Award, the AARWBA Logo and American Auto Racing Writers & Broadcasters Association are trademarks of AARWBA and may not be used without the express, written permission of the Association.