The 2008 Auto Racing All-America Team
And AARWBA's Driver of the Year, Tony Schumacher, Winner of the Jerry Titus Memorial Trophy 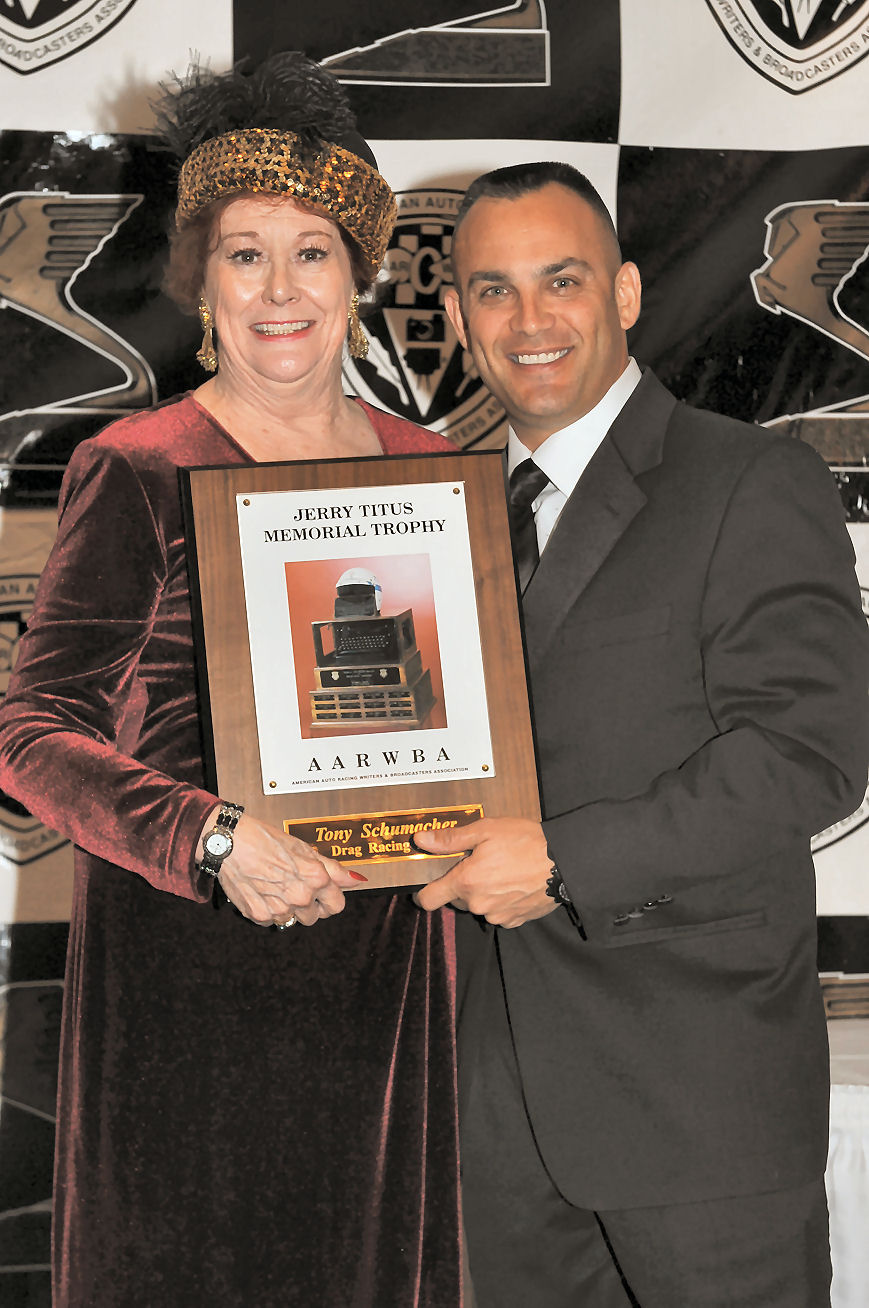 
President Dusty Brandel with Past President Johnny McDonald. It was McDonald's idea to create the All America Team for motor sports. First award was presented to Al Unser, Sr. in 1970, at Ontario Motor Speedway.

In the closest margin in over a quarter-century, Schumacher edged NASCAR Sprint Cup titlist Jimmie Johnson by one vote. Shirley Muldowney received one vote more than Bobby Allison in 1982.

The Titus Trophy is awarded to the driver who receives the most All-America Team votes. It is named in memory of the late journalist and racer, who was an AARWBA member. It is the highest honor offered by AARWBA, the country's oldest and largest organization of motorsports media professionals.

Schumacher dominated the Top Fuel class. He finished with 15 wins out of 18 final-round appearances in 24 events, had seven consecutive victories, made 11 straight final rounds and had 31 consecutive round wins. All are records. His 76 round wins tied Greg Anderson's single-season mark. Along the way, Schumacher surpassed Joe Amato's all-time Top Fuel wins record and ended the 2008 season with a career total of 56 victories.

"It's a thrill to be named the Jerry Titus Trophy winner," said Schumacher, who also won the award in 2006. "Given the history-making season the U.S. Army team had in 2008, I wish this trophy could be split up in a lot of different ways so every crew guy can have a piece for themselves. When I look back on this past season, I can safely say I was part of the greatest Top Fuel team that's ever been assembled in NHRA history.

"I'm also happy that I could bring home another Titus award to the NHRA world. With so many talented drivers from so many different series eligible, to be singled out as the top vote-getter is really special. It clearly means drag racing is getting its fair share of attention."

Several special awards were presented: Pioneer In Racing Award: Dave McClelland, the legendary NHRA announcer and broadcaster, was honored for longtime dedication and achievement that has made a difference in the sport. The Pioneer is one of AARWBA's oldest and most prestigious awards and this was the first time it was presented to someone in the media. McClelland was the evening's Master of Ceremonies. Co-Chairperson Susan Wade made the introduction and presentation.

Jim Chapman Award: Judy Stropus received the honor for excellence in motorsports public relations. It is named in memory of Chapman, the late legendary PR executive, who was Babe Ruth's PR rep and director of racing for CART series sponsor PPG Industries. Stropus, representing Don Schumacher Racing, was chosen by a blue-ribbon committee of journalists, all of whom knew Chapman. The plaque was presented by ceremony Co-Chairman Michael Knight and AARWBA Southern Vice President Mike Harris, both close friends of Chapman.

Appreciation Awards: Ford, Honda, Toyota, Mazda and Porsche were recognized by President Dusty Brandel for their longtime support of the organization. All were represented at the ceremony.

Gorsline Scholarship: The 16th annual scholarship, given by John Gorsline of The Gorsline Co., went to Star Mazda series runner-up Joel Miller. The prize is awarded to an up-and-coming driver who displays the attributes of a future champion.

The 40th Anniversary Auto Racing All-America Banquet, will be held in January, 2010. Members of the racing news media meet to honor the drivers cited for their efforts during the 2009 racing season. It's one of the few banquets in the racing industry that's open to the public.